Being on a film set is an exciting, creative hub of activity. It can also be a long day. And it can be all of these things, all at the same time. It’s where the magic happens, but it isn’t where the journey starts. 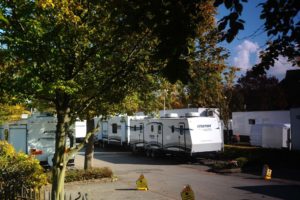 The day starts at the Unit Base. It’s a bit like a communal waiting area – or a campsite. Here you will find all the trucks and trailers needed to facilitate a film production. The Costume and Make-up trucks are parked here along with the artists trailers and the ever important Catering Truck and Dining Bus.

It’s here that the cast and crew are fed, the actors get into costume, hair and make-up, and the day’s plans and schedules are discussed. All before the days filming starts.

For a Supporting Artist, or an SA as they are known, the Unit Base is where they spend the majority of their time. There will be a designated area where all SA’s gather; this can be a room or a marquee. It’s even been known for the Dining Bus to be utilized as a SA holding area. It very much depends on the location – if they’re filming in the middle of a field, in the middle of nowhere then expect a marquee or tent type construction.

Digressing ever so slightly here at the mention of filming in remote locations, but I feel the need to offer a little advice on the  – just in case.

Essentials that every SA should have with them

On a film set it’s always better to be over prepared than under. Trust me on that one.

Firstly, a waterproof oversized coat, like a puffa style jacket, is a must – one that will keep you warm, cozy and dry in the middle of those cold winter days. Make sure it’s too big in case you’re dressed in period costumes with lots of layers. If it has a hood, don’t use it, especially if the make-up team has already styled your hair. They will not be pleased!

Welly boots are always handy – remote locations usually mean mud! I worked on a production a couple of years ago where we filmed in the countryside and the Unit Base was literally a field. It was a 4-week shoot and it rained for 3 of them. It got very, very muddy.

Also bring suitable sun block for that day when we have sunshine and gloriousness.

Snacks – whilst there are caterers on set, it’s a good idea to have a little something in your bag that you can nibble on if you’re stuck on set and can’t get to the craft table (this is where the teas, coffee and snacks are kept.) If you have food intolerance or dietary restriction it’s best to let the crew know before your first day of filming.

It’s a good idea to bring a book, or something to keep you occupied whilst you’re hanging around between periods of activity. It’s better to take something you don’t mind losing in case it gets left behind somewhere, as sometime happens. Colouring books, simple crafting or similar might be suitable.

Anyway, back to the topic.

SA’s will be fitted by the Costume and Make-up departments, and they will be very experienced. It is feasible that a fitting will have been done on a day prior to the actual filming day, especially on the bigger productions or those that have more specialised costumes or wigs pieces – a Victorian costume for example with the corsets and bustles and the extravagant hair styles. On a more contemporary piece, the production may ask the SA’s to wear their own clothes. It’s a good idea to bring a few options. The production will inform you of the style of clothing you need to be wearing (like jeans and T-Shirt or a party frock).

Once in costume, it’s a case of waiting for the call to set. This can vary – you might be called straight away, after lunch or for the very last scene. There have also been occasions where filming with SA’s has not happened at all and has to be rescheduled for another day.

The call to set will come from the AD (Assistant Director) department. There might be a line up where the costume and make-up departments have a final check make sure everything is perfect before you are shuttled to set. It could be a short walk or a minibus drive down to set, just follow the 2nd AD’s instructions and you’ll be on your way to where the magic happens. 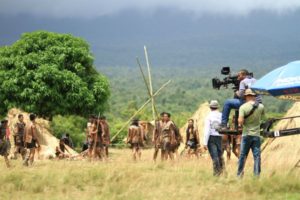 Once on set, the SA’s will be met by the 3rd AD who will be directing you on where to stand and what you need to do, like take a walk across screen or talk in a group. If it’s a battle scene, you may just be told to charge!

Placing the SA’s within the scene which is called blocking, or dressing, and a it is really important that you remember as much as possible about where your first position is, who you are stood with and, if you move at all, which line you moved on and in which direction.

Continuity on a film set is very important. I’m sure you’ve all seen the articles that list all the mistakes in a film! It’s a constant struggle for the crew and the more you remember, the more you help the production. Its even more important to remember what you do if the scene is shot over consecutive days – and some big scenes can take a week to shoot.

Once the SA’s are blocked, there is usually a last rehearsal before the cameras start rolling. From then on, it’s a case of repetition and doing the scene, or parts of, until the director has got ‘The One’ shot that they need.

Working on a film set was once described to me as a ‘hurry up and wait’ job and that is very apt. There is a lot of waiting around for your moment to shine. It’s your moment in front of the camera.

Is it worth it? Absolutely.

The filming industry is the only place I know that is filled with a sense of camaraderie that creates an instant workplace family. Sure, there are the odd squabbles and creative differences but what self-respecting family doesn’t have those?

It’s a mix of awe and excitement, you get to meet some truly inspiring people and be part of the magic. You also get those times when you’re just hanging around, waiting for the call to set.

What is it like on a film set? It’s a magical place to hang out … but you might want to bring a book with you.